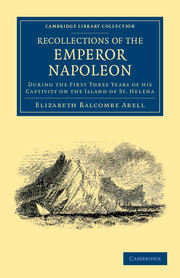 Recollections of the Emperor Napoleon
During the First Three Years of his Captivity on the Island of St. Helena