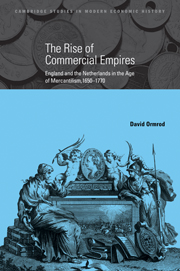 The Rise of Commercial Empires
England and the Netherlands in the Age of Mercantilism, 1650–1770