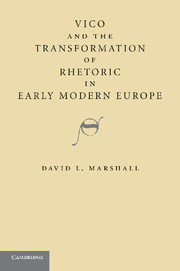 Vico and the Transformation of Rhetoric in Early Modern Europe