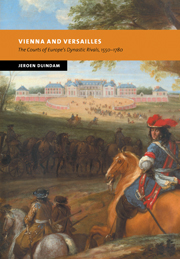 Vienna and Versailles
The Courts of Europe's Dynastic Rivals, 1550–1780