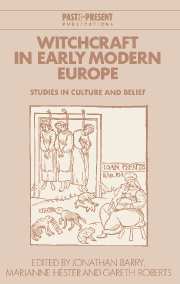 Witchcraft in Early Modern Europe
Studies in Culture and Belief