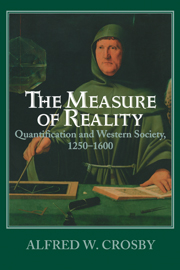 The Measure of Reality
Quantification in Western Europe, 1250–1600