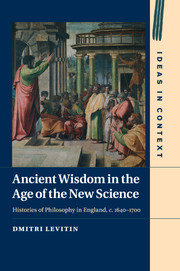 Ancient Wisdom in the Age of the New Science
Histories of Philosophy in England, c. 1640–1700