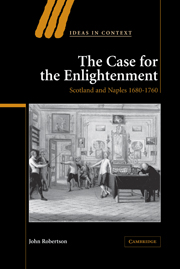 The Case for The Enlightenment
Scotland and Naples 1680–1760