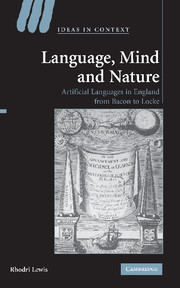 Language, Mind and Nature
Artificial Languages in England from Bacon to Locke