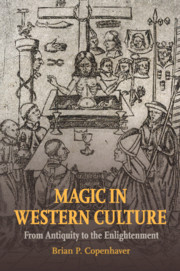 Magic in Western Culture
From Antiquity to the Enlightenment