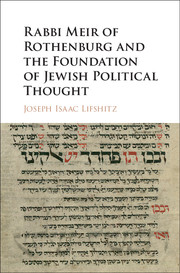 Rabbi Meir of Rothenburg and the Foundation of Jewish Political Thought