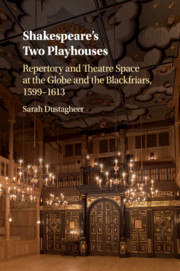 Shakespeare's Two Playhouses
Repertory and Theatre Space at the Globe and the Blackfriars, 1599–1613