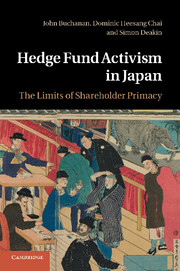 Hedge Fund Activism in Japan
The Limits of Shareholder Primacy