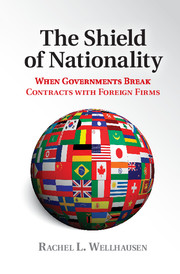 The Shield of Nationality
When Governments Break Contracts with Foreign Firms