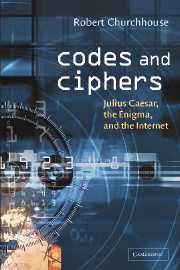 Codes and Ciphers
Julius Caesar, the Enigma, and the Internet