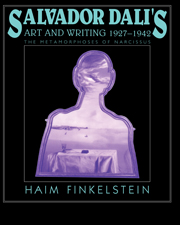 Salvador Dalí's Art and Writing, 1927–1942
The Metamorphosis of Narcissus

Part of Res Monographs in Anthropology and Aesthetics