Skip to main content Accessibility help
Internet Explorer 11 is being discontinued by Microsoft in August 2021. If you have difficulties viewing the site on Internet Explorer 11 we recommend using a different browser such as Microsoft Edge, Google Chrome, Apple Safari or Mozilla Firefox.
Open global navigation
Cambridge University Press
Home
> Subjects
> An Economic History of Europe

An Economic History of Europe

Knowledge, Institutions and Growth, 600 to the Present 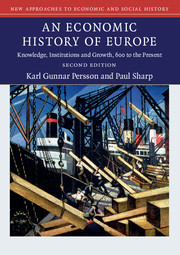 This revised and extended edition of the leading textbook on European economic history has been updated to take account of contemporary economic developments and the latest research and debates. A concise and accessible introduction that covers the full sweep of the European history, the book focuses on the interplay between the development of institutions and the generation and diffusion of knowledge-based technologies. With simple explanations of key economic principles, the book is an ideal introduction for students in history and…