The Process of Innovating Medical Technologies 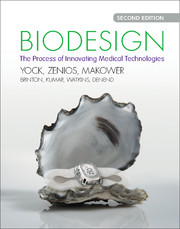 This step-by-step guide to medical technology innovation, now in full color, has been rewritten to reflect recent trends of industry globalization and value-conscious healthcare. Written by a team of medical, engineering, and business experts, the authors provide a comprehensive resource that leads students, researchers, and entrepreneurs through a proven process for the identification, invention, and implementation of new solutions. Case studies on innovative products from around the world, successes and failures, practical advice, and end-of-chapter 'Getting Started' sections encourage readers…