Skip to main content Accessibility help
Internet Explorer 11 is being discontinued by Microsoft in August 2021. If you have difficulties viewing the site on Internet Explorer 11 we recommend using a different browser such as Microsoft Edge, Google Chrome, Apple Safari or Mozilla Firefox.
Open global navigation
Cambridge University Press
Home
> Subjects
> Essentials of Igneous and Metamorphic Petrology

Essentials of Igneous and Metamorphic Petrology 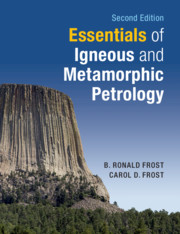 All Earth Science students need to understand the origins, environments, and basic processes that produce igneous and metamorphic rocks. This concise introductory textbook provides students with the essential knowledge needed to understand how petrology relates to other topics in the geologic sciences, and has been written specifically for one-semester courses. Throughout, the emphasis is on interpreting the mineralogy and petrology of rock suites in terms of origin and environment, with the first half of the book concentrating on igneous rocks,…