Skip to main content Accessibility help
Internet Explorer 11 is being discontinued by Microsoft in August 2021. If you have difficulties viewing the site on Internet Explorer 11 we recommend using a different browser such as Microsoft Edge, Google Chrome, Apple Safari or Mozilla Firefox.
Open global navigation
Cambridge University Press
Home
> Subjects
> Ethics and Law for Australian Nurses

Ethics and Law for Australian Nurses 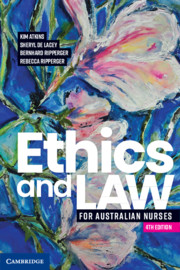 A sound understanding of moral and legal obligations is critical to developing responsible nursing practice and building the nurse-patient relationship. Ethics and Law for Australian Nurses provides a practical framework for understanding the ethical and legal dimensions of nursing practice. The fourth edition has been thoroughly revised to include updates to legislation, the NMBA professional standards and case examples. A new chapter on the legal system and a fully revised chapter on duty of care and negligence provide a thorough…