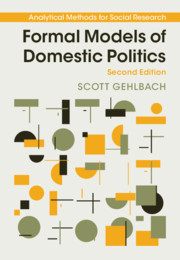 Formal Models of Domestic Politics offers a unified and accessible approach to canonical and important new models of politics. Intended for political science and economics students who have already taken a course in game theory, this new edition retains the widely appreciated pedagogic approach of the first edition. Coverage has been expanded to include a new chapter on nondemocracy; new material on valance and issue ownership, dynamic veto and legislative bargaining, delegation to leaders by imperfectly informed politicians, and voter…