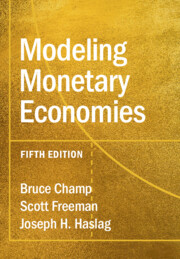 Content for this title is coming soon. In the meantime you can view the title on Cambridge Core.

Thoroughly updated and expanded with a new chapter on blockchain and increased coverage of cryptocurrency, as well as new data, this established advanced undergraduate textbook approaches the subject via first principles. It builds on a simple, clear monetary model and applies this framework consistently to a variety of monetary questions. Starting with trade being mutually beneficial, the authors demonstrate that money makes people better off, and that government money competes against other means of payments, including other types of government…