Skip to main content Accessibility help
Internet Explorer 11 is being discontinued by Microsoft in August 2021. If you have difficulties viewing the site on Internet Explorer 11 we recommend using a different browser such as Microsoft Edge, Google Chrome, Apple Safari or Mozilla Firefox.
Open global navigation
Cambridge University Press
Home
> Subjects
> Principles of Igneous and Metamorphic Petrology

Principles of Igneous and Metamorphic Petrology 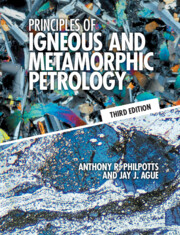 Building upon the award-winning second edition, this comprehensive textbook provides a fundamental understanding of the formative processes of igneous and metamorphic rocks. Encouraging a deeper comprehension of the subject by explaining the petrologic principles, and assuming knowledge of only introductory college-level courses in physics, chemistry, and calculus, it lucidly outlines mathematical derivations fully and at an elementary level, making this the ideal resource for intermediate and advanced courses in igneous and metamorphic petrology. With over 500 illustrations, many in color,…