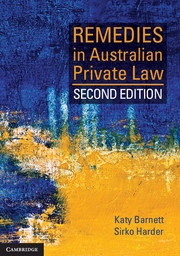 The second edition of Remedies in Australian Private Law offers readers a clear and detailed introduction to remedies and their functions under Australian law. Clearly structured, with a strong black-letter law focus, the text provides a complete treatment of remedies in common law, equity and statute and develops a framework for understanding the principles of private law remedies and their practical application. This edition has been significantly revised and offers up-to-date coverage of case law and legislation, including the Australian…