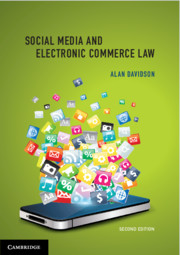 The ever-evolving nature of electronic commerce and social media continues to challenge the capacity of the courts to respond to privacy and security violations in 'cyberlaw'. Social Media and Electronic Commerce Law is designed to provide students and legal practitioners with a thorough and engaging exploration of the laws, regulations and grey areas of commerce via online platforms. This new edition has been thoroughly revised to address changes in legislation and recent court judgments, and to reflect the dynamic sphere…