Skip to main content Accessibility help
Internet Explorer 11 is being discontinued by Microsoft in August 2021. If you have difficulties viewing the site on Internet Explorer 11 we recommend using a different browser such as Microsoft Edge, Google Chrome, Apple Safari or Mozilla Firefox.
Open global navigation
Cambridge University Press
Home
> Subjects
> The Cambridge Handbook of the Psychology of Prejudice

The Cambridge Handbook of the Psychology of Prejudice 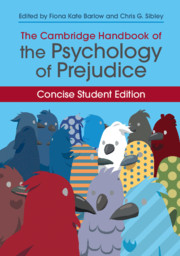 The Cambridge Handbook of the Psychology of Prejudice: Concise Student Edition aims to answer the questions: why is prejudice so persistent? How does it affect people exposed to it? And what can we do about it? With cutting-edge research from top scholars in the field, the chapters present an overview of psychological models of prejudice and investigate key domains such as racism, sexism, and the criminal justice system. This student edition of the award-winning Handbook includes new pedagogical features such…