Skip to main content Accessibility help
Internet Explorer 11 is being discontinued by Microsoft in August 2021. If you have difficulties viewing the site on Internet Explorer 11 we recommend using a different browser such as Microsoft Edge, Google Chrome, Apple Safari or Mozilla Firefox.
Open global navigation
Cambridge University Press
Home
> Subjects
> The Constitution of the Commonwealth of Australia

The Constitution of the Commonwealth of Australia 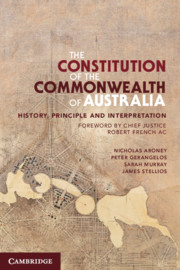 The Constitution of the Commonwealth of Australia examines the body of constitutional jurisprudence in an original and rigorous yet accessible way. It begins by exploring the historical and intellectual context of ideas surrounding the Constitution's inception, and closely examines its text, structure, principles and purposes in that light. The book then unpacks and critically analyses the High Court's interpretation of the Constitution in a manner that follows the Constitution's own logic and method of organisation. Each topic is defined through…