Skip to main content Accessibility help
Internet Explorer 11 is being discontinued by Microsoft in August 2021. If you have difficulties viewing the site on Internet Explorer 11 we recommend using a different browser such as Microsoft Edge, Google Chrome, Apple Safari or Mozilla Firefox.
Open global navigation
Cambridge University Press
Home
> Subjects
> The Cosmos

Astronomy in the New Millennium 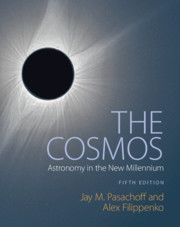 The fifth edition of The Cosmos: Astronomy in the New Millennium provides you with the fundamentals of astronomical knowledge that have been built up over decades, with an expanded discussion of the incredible advances that are now taking place in this fast-paced field, such as New Horizons' flyby of Pluto, exoplanets, 'dark matter', and the direct detection of gravitational waves by the Laser Interferometer Gravitational-Wave Observatory (LIGO). Written in a clear and easily understandable style, this textbook has been thoroughly…