Skip to main content Accessibility help
Internet Explorer 11 is being discontinued by Microsoft in August 2021. If you have difficulties viewing the site on Internet Explorer 11 we recommend using a different browser such as Microsoft Edge, Google Chrome, Apple Safari or Mozilla Firefox.
Open global navigation
Cambridge University Press
Home
> Subjects
> The Emergence and Development of English

The Emergence and Development of English 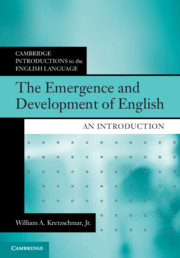 This textbook provides a step-by-step introduction to the history of the English language (HEL), offering a fresh perspective on the process of language change. Aimed at undergraduate students, The Emergence and Development of English is accessibly written, and contains a wealth of pedagogical tools, including chapter openers, key terms, chapter summaries, end-of-chapter exercises and suggestions for further reading. A central theme of the book is 'emergence', the key term from the study of complex systems, which describes how massive numbers…