Skip to main content Accessibility help
Internet Explorer 11 is being discontinued by Microsoft in August 2021. If you have difficulties viewing the site on Internet Explorer 11 we recommend using a different browser such as Microsoft Edge, Google Chrome, Apple Safari or Mozilla Firefox.
Open global navigation
Cambridge University Press
Home
> Subjects
> The Law and Policy of the World Trade Organization

The Law and Policy of the World Trade Organization 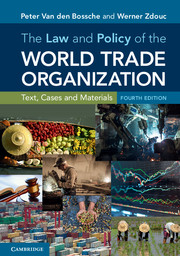 Retaining the signature clarity and depth that made it an instant classic, this new fourth edition of The Law and Policy of the World Trade Organization examines both the institutional and substantive law of the World Trade Organization (WTO). Fully updated to incorporate all new developments in the WTO's body of case law, this market-leading text offers readers a clear introduction to the basic principles of the multilateral trading system and a detailed examination of the law of the WTO.…