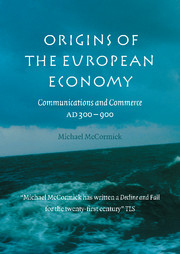 Origins of the European Economy
Communications and Commerce AD 300–900