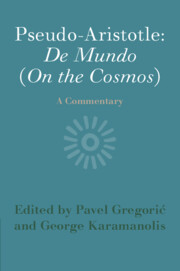 Pseudo-Aristotle: De Mundo (On the Cosmos)
A Commentary