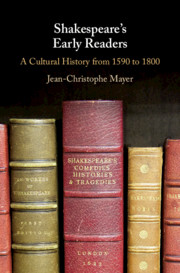 Shakespeare's Early Readers
A Cultural History from 1590 to 1800