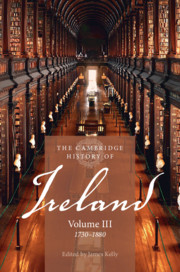 The Cambridge History of Ireland

Part of The Cambridge History of Ireland