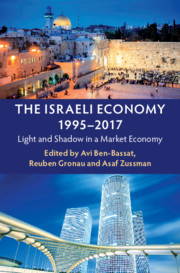 The Israeli Economy, 1995–2017
Light and Shadow in a Market Economy