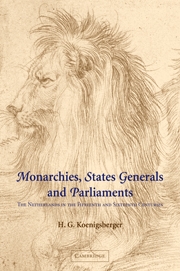 Monarchies, States Generals and Parliaments
The Netherlands in the Fifteenth and Sixteenth Centuries