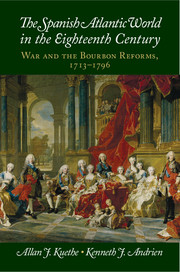 The Spanish Atlantic World in the Eighteenth Century
War and the Bourbon Reforms, 1713–1796