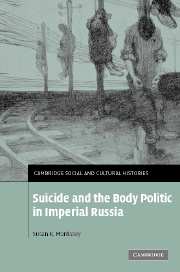 Suicide and the Body Politic in Imperial Russia