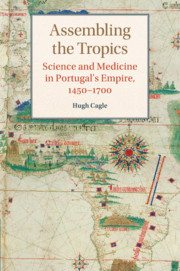 Assembling the Tropics
Science and Medicine in Portugal's Empire, 1450–1700