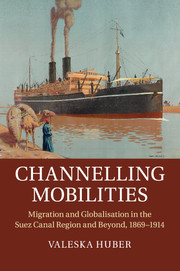 Channelling Mobilities
Migration and Globalisation in the Suez Canal Region and Beyond, 1869–1914