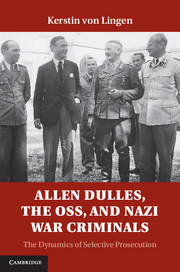 Allen Dulles, the OSS, and Nazi War Criminals
The Dynamics of Selective Prosecution