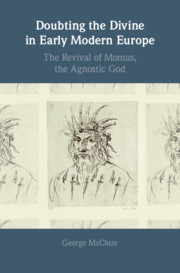 Doubting the Divine in Early Modern Europe
The Revival of Momus, the Agnostic God