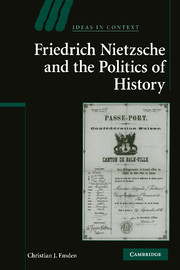 Friedrich Nietzsche and the Politics of History