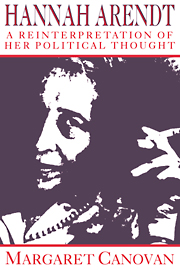 Hannah Arendt
A Reinterpretation of her Political Thought