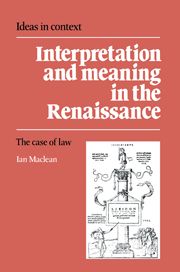 Interpretation and Meaning in the Renaissance
The Case of Law