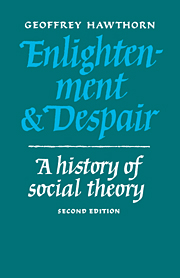 Enlightenment and Despair
A History of Social Theory