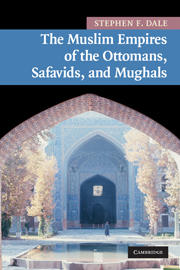 The Muslim Empires of the Ottomans, Safavids, and Mughals