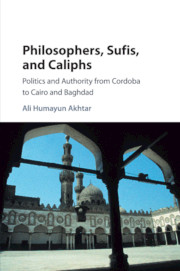 Philosophers, Sufis, and Caliphs
Politics and Authority from Cordoba to Cairo and Baghdad