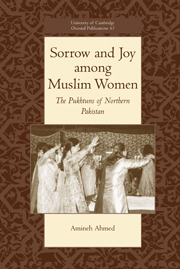 Sorrow and Joy among Muslim Women
The Pukhtuns of Northern Pakistan