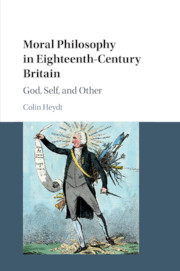 Moral Philosophy in Eighteenth-Century Britain
God, Self, and Other